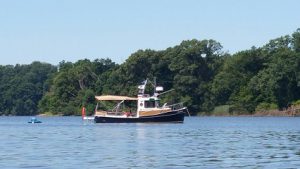 In the opening scene of Vital Spark, Alex Allaway is driving along a coastal road, through a valley of summer corn on Maryland’s eastern shore. She’s thrilled to be returning home. She’s landed a job as a fisheries ecologist at a small marine station in her hometown of River Glen. River Glen is the epicenter of my new Chesapeake Tugboat Murders series. The village is located at the intersection of the fictional Glen River and the real Chesapeake Bay. 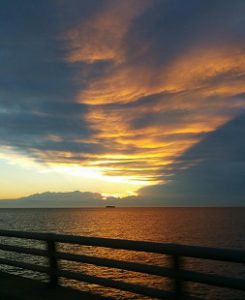 From the farmlands, Alex descends into the village, passing a bed and breakfast, seafood restaurant and tiki bar, Luna’s Tarot Shack, marinas, boatyards, and then Old Ben’s cottage and her grandfather’s dilapidated riverfront home. At the end of her grandfather’s dock floats his faithful old tugboat, the Vital Spark. This scene familiarizes the reader with both the landscape of River Glen and its main characters … in Alex’s portentous words, “all the usual suspects.”

Why an oddball village on the upper Chesapeake to locate a series of mystery-thrillers? Why not remain on Cape Cod, where I’ve killed my Woods Hole characters by Viking plagues and serial killers in labyrinths? Or why not Philadelphia, where I currently reside? Certainly murders in the Franklin Institute, the Betsy Ross House or a dead body stuffed into the Liberty Bell might hold some gruesome fascination for the mystery lover. Why River Glen?

The answer is simple: pirates.

It’s been my dream to write a mystery series focused on pirates, both ancient and modern. The first story I remember is Look Out For Pirates, read to me countless times by my grandfather. I was hooked; there was no turning back. As a child I was a pirate for countless Halloweens. And what grown woman of sane mind gets a skull and cross bones tattoo … in her fifties? In preparation for the Chesapeake Tugboat Murders, I dove into the historical literature. Piracy in the Americas brings to mind the Caribbean, but I was astonished at the extraordinary history of piracy in the Chesapeake, the nautical backyard of my hometown of Washington DC.

The three stories in the Woods Hole Mysteries were done and in various stages of publication. It was time to write something new. At this same time, I visited the Baltimore boat show and, after decades of searching … I found it … the perfect adventure boat, a rugged mini-tugboat. While the boat was being built in Seattle, I got to work finding a Chesapeake marina. I drove along the coastal road, through a valley of summer corn, descended a hill, and passed B & Bs, restaurants and boat yards. A sleepy little marina tucked into a tranquil cove seemed the perfect base of operations. The tugboat soon arrived and I motored out to explore. 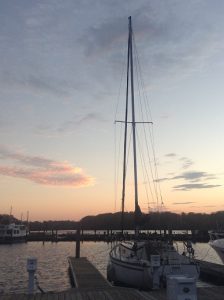 Water provides a unique perspective of the world. I looked back toward land. Suddenly the year was 1688. The pirate ship Raven is beached, her hull riddled with shipworms. The rotting planks creak and groan under the strain … the weight of Spanish gold. The Scottish pirates are stranded. They have no choice. Winter approaches. They disassemble Raven to build huts. Colonial River Glen sprouts from the shoreline. The pirates and women ex-convicts stolen from a Virginia plantation subsist on the plentiful deer, herring, and blue crabs. Families form; children are born.

Then the village treasury … the gold … goes missing.

A tribunal, presided over by Charles Allaway, quickly assembles. Neville Whitby and his wife, Poison Emmaline, are found guilty of the theft. Their punishment is banishment. On the night of the verdict, Allaway’s severed head appears on pike in the town square. The Whitby family has fled. Giles Hale, the inseparable boyhood friend of Allaway, stalks the Whitbys through the night. The next morning, Neville Whitby, Poison Emmaline and their children are found slaughtered on the beach. Giles Hale, now the Blood-hand, vanishes into historical obscurity (or does he?).

Fast-forward to 2017. Alex Allaway is thrilled to be returning home to River Glen to take the job at the marine station. But instead she discovers her grandfather murdered, and in his clenched fist a piece of gold and a cryptic map with her name on it.

With each subsequent cruise on my tugboat, the world of River Glen unfolded … the raucous pirate festival, Giles Blood-hand Day, on the town pier … a marine lab in a silent marsh … the duck blind where a murderous Clyde Whitby plots Alex’s demise … the marijuana grow house and whiskey still hidden in the woods … a pirate graveyard of moss-covered headstones … a pine forest where a match is struck … the vital spark … a gas-soaked car burns in the night … igniting an ancient pirate feud.

Characters populate the landscape: the ditzy Alex, her unmanageable black lab Water Boy, a mad artist, crabber-potheads, Luna the Psychic, a burned-out detective, a mysterious Scottish actress, a brilliant pathologist, a wicked narcissist … and ruthless treasure hunters who will stop at nothing …

Pirate blood flows hot and vengeful in the modern villagers of River Glen.

Where in this world is the lost treasure of Giles Blood-hand?